Roos: “We are ready to make a statement”

The growth of the Springbok Women’s team over the last 12 months and their determined climb up the world rankings had many take notice of a potential new entry into the top ten of the world game, and those in the know will also point to the coinciding debut of a dynamic outside back in the green and gold and the impact Nadine Roos has made in this time.

It is hard to believe Roos was first capped a mere 11 months ago and now, eight Tests later, the 26-year-old is rated amongst the best fullbacks at the Rugby World Cup, due to start on 8 October.

Roos will get a second opportunity against Les Bleus – the team she made her Test debut against – this time at Eden Park in Auckland, New Zealand and not in Vannes, France. And for the speedster, there is a world of difference between the two outings.

“I know and understand fifteens so much better than 11 months ago – at that time, I was just starting out playing fifteens, so I was learning as I went along,” said Roos.

“That first Test match against France was not the easiest match I participated in, but I will remember it for the rest of my life. Any athlete wants to compete at the highest level and that was my entry into test rugby.

“Now I am playing on an even bigger stage, the Rugby World Cup and I could not be prouder of that fact.”

The ability to attack space and use her superior fitness and speed have always worked well for Roos on the sevens fields of the world, with her scoring prowess and playmaking abilities establishing her as one of the major players in the HSBC World Rugby Sevens Series and – more recently – Rugby World Cup Sevens, where she was named in the tournament's Dream Team, despite South Africa finishing in 14th position. 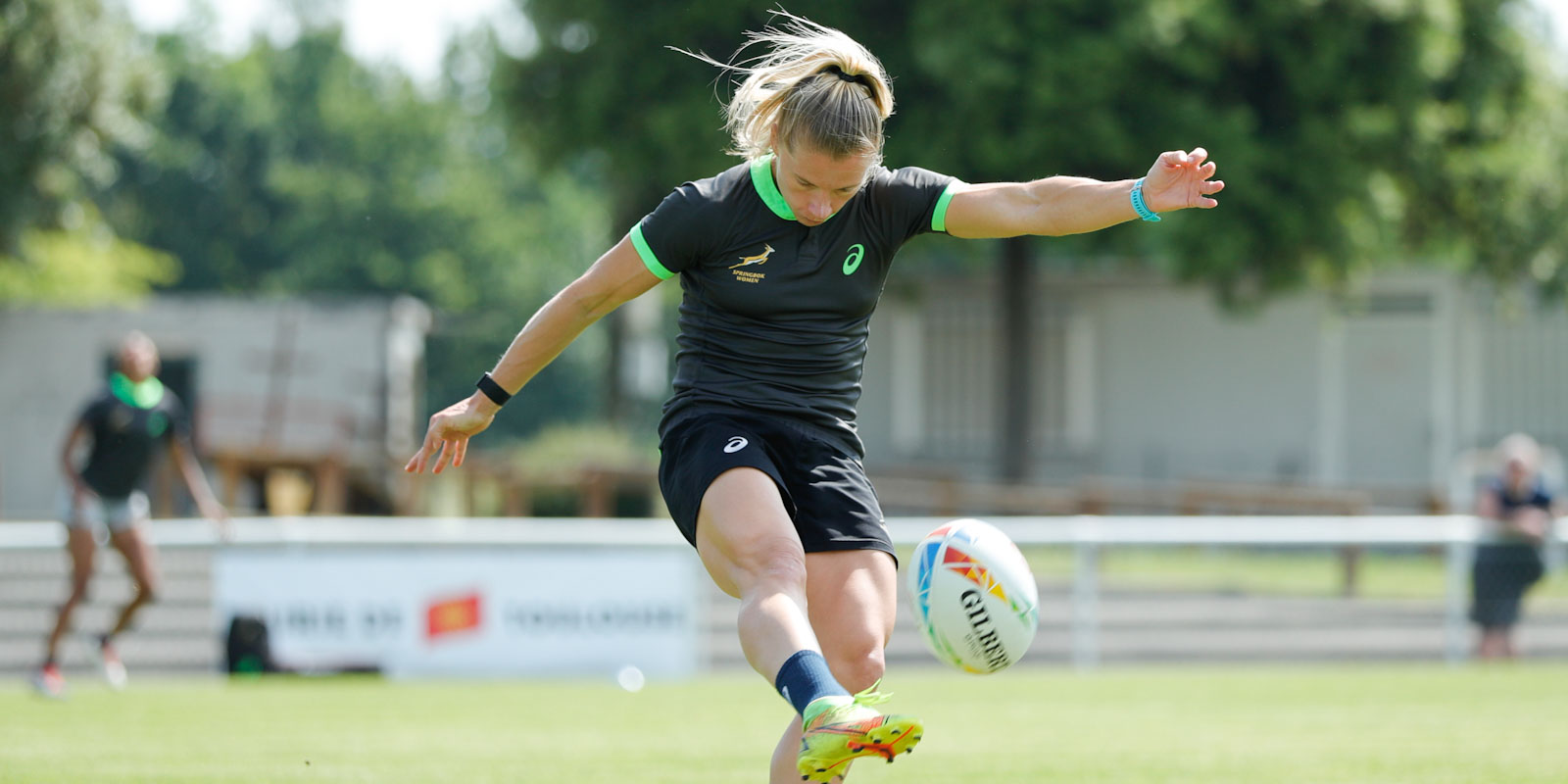 Roos had to add kicking to her skills set when she moved to XV's rugby.

She has proven to be a handful in fifteens too and according to Springbok Women backs coach Lungisa Kama, more is to come from Roos.

“Her ability to attack the space is a wonderful asset,” said Kama.

“There is a different alignment in fifteens, when to take the gap and attack that space is where the main differences exist between the two codes and that is where Nadine’s biggest growth area was. Attacking from the back is one thing, it all depends where on the field you are, and she has adapted to that very well.

“We are asking her to use that ability to finish and score tries, and she is creating nicely at the moment.”

For Roos, that role fits like a glove: “I am a playmaker in sevens and need to find space for the rest of my teammates and in that regard, not much has changed. It is obviously a more congested defence and field position remains crucial, so the game management is another area of decision-making.”

Roos feels the momentum with the squad will benefit them when they come up against France.

“We certainly have grown and developed from that day in Vannes – not only me, but the rest of the squad as well,” she said.

“We are now in a position where we can cause an upset on Saturday. We came to New Zealand to win matches and that first opportunity to do so will present itself on Saturday.”

The Springbok Women are perfectly happy to sail under the radar at the Rugby World Cup in New Zealand and prefer not to get into the pre-tournament hype of the global showpiece event of the women's game.

The South African sides may have made an exceptional start to the opening three rounds of the Vodacom United Rugby Championship, but even in these embryonic early stages it is apparent that Irish powerhouse Leinster are determined to reclaim their hegemony in the competition.

This is our moment - Booi

There was the usual chatter and small talk amongst the 12 captains at the Rugby World Cup at Eden Park in Auckland on Sunday during the official captain's photo of the women's rugby showpiece, and a good reflection of the game’s heavy hitters that assembled.

South Africa’s Jaco Peyper has been appointed as referee for two Tests in the traditional November international window after he was given a break during the recently-concluded Castle Lager Rugby Championship.

The Springbok Women team to play France in their opening Pool C match of the Rugby World Cup in New Zealand has a familiar and experienced look to it, with only prop Sanelisiwe Charlie not a regular starter in the 2022 season.

A player who used torment them in the colours of a rival South African franchise might just prove to be one of the most formidable obstacles the Cell C Sharks need to overcome when they face their Vodacom United Rugby Championship moment of truth in Dublin on Saturday.

The Emirates Lions team to face Edinburgh in a Vodacom United Rugby Championship clash on Friday evening show just two changes from the side that beat Cardiff last weekend.

It was a case of “the road less travelled” for the Springbok Women when they made their return to international rugby in 2017, three years after their 2014 Rugby World Cup exit.

South Africa’s Jaco Peyper has been appointed as referee for two Tests in the traditional November international window after he was given a break during the recently-concluded Castle Lager Rugby Championship.