Etzebeth and Mbonambi thrilled to celebrate milestones with victory

Eben Etzebeth and Bongi Mbonambi were delighted celebrate their special Springbok career milestones with a Castle Lager Incoming Series victory against Wales at DHL Stadium in Cape Town on Saturday and said they were proud as individuals, as well as for the team and the country.

Etzebeth became the seventh player to his earn his 100th Test cap in the history of Springbok rugby, while Mbonambi became the 45th player to earn a half century of caps as the team wrapped up their three-match series against Wales with a 30-14 win in Cape Town.

The series win followed on another massive victory for the Springboks a little less than a year ago at the same stadium against the British & Irish Lions in the Castle Lager Lions Series.

“Our main goal was to win the series and we approached the match like a final,” said Etzebeth.

“We trained well, and we managed to pull it through, and I think we may be in a few more situations like this.

“But it was special to have my family here and my fiancé (Anlia van Rensburg) singing the national anthem.

“Bongi also played his 50th Test, and he has been a warrior for Springbok rugby, so it was special to share this day with him.”

Mbonambi was equally delighted with his achievement and said: “To be a Springbok is not an easy journey. It took me longer to get here than other players, but it was a special day. 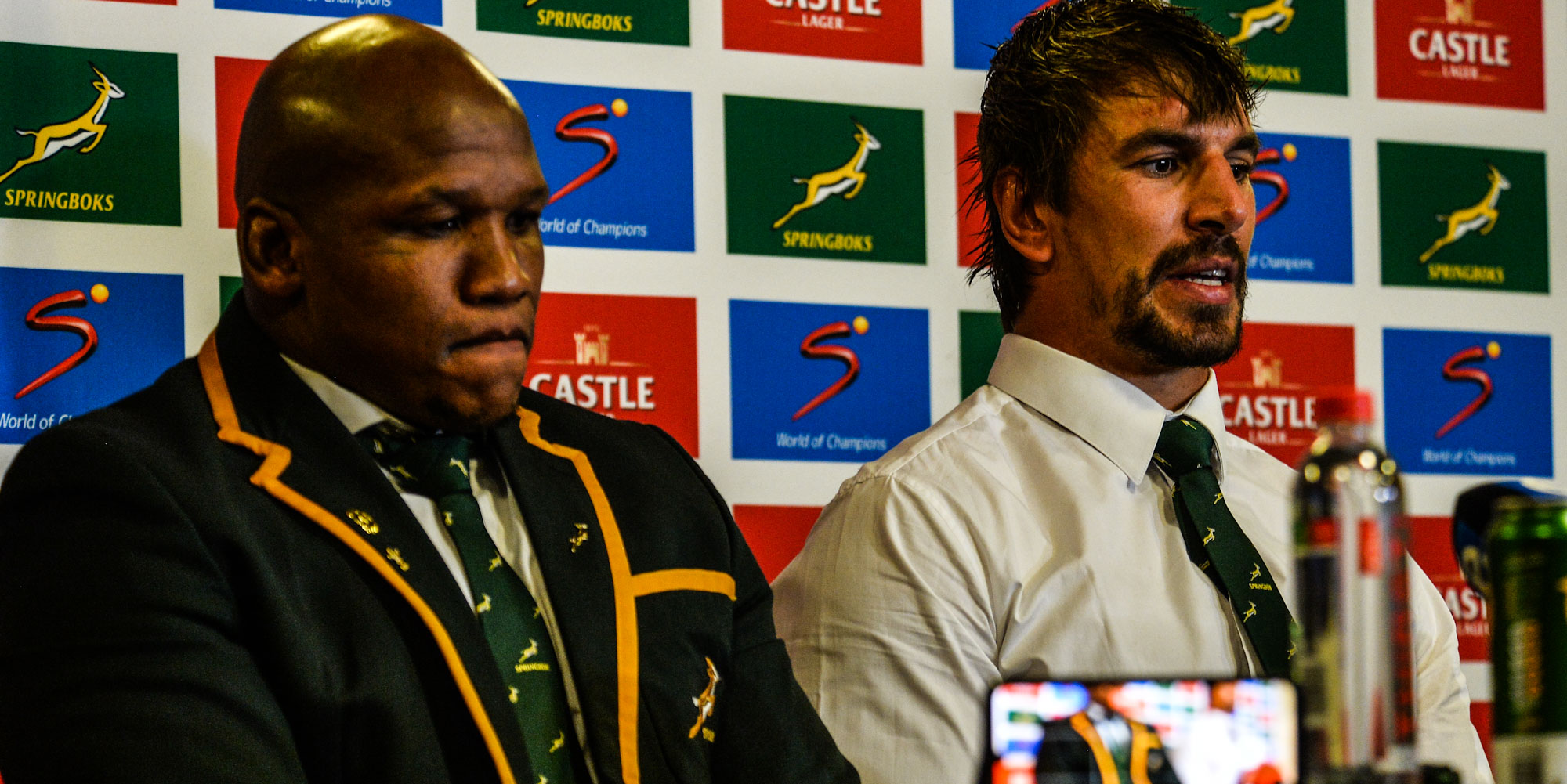 Facing the media after their milestone Tests.

“As Eben said, we never made it about ourselves. As a team we stuck to the plan and the players put in their best efforts.

“My family was here as well, which was special, but the most important aspect is that we managed to secure the series win.

“It is a humbling experience to play 50 Tess, and hopefully I can be like Eben and make it to 100 Tests.”

Etzebeth admitted that he had further career goals when quizzed about whether hoped to become the most capped player of all time, and said: “I have my goals, but I prefer to keep them to myself. To play my 100th Test was one of them and that came true today, and to be a member of such a small group of players to achieve it is an honour.”

Commenting on the match in which the Springboks built on a 17-8 halftime lead before sealing the 30-14 victory, Etzebeth said: “Many wrote off Wales after their performance in the Six Nations, but they are tough players, and it was a difficult series.

“We will have the week off and then we will prepare for the Castle Lager Rugby Championship which kicks off with two matches against the All Blacks at home.”

Mbonambi said the series victory was not only for the team, but the country as well.

“Winning the series was vital for us,” said Mbonambi. “We know every country will be coming for us, but this was not just about the Springboks. It was for the supporters and our country.”

Springboks seal the deal against Wales in Cape Town

The Springboks clinched a hard-fought, but ultimately deserved Castle Lager Incoming Series 2-1 win over Wales, beating their determined opponents by 30-14 in the third and final Test at DHL Stadium in Cape Town on Saturday.

Springbok coach Jacques Nienaber admitted that the thought of defeat couldn’t be entertained in the build-up to his team’s 30-14 victory over Wales at the DHL Stadium in Cape Town in the final match of the three-Test Castle Lager Incoming Series on Saturday.

SA Schools too strong for A team counterparts

The SA Schools side had too much class and won an entertaining clash against the SA Schools A side by 57-27 (half-time 26-13) after a few bursts of tries during the game ensured they remained in control in a match that underlined the good health of Under-18 rugby in South Africa.

SuperSport Schools is streaming the U18 match between the SA Schools and SA Schools A sides live from Cape Town, kick-off is 12h30.

Boks have all the motivation they need to win

The Springboks will have all the motivation they need to win their final Castle Lager Incoming Series match against Wales in Cape Town on Saturday with a series victory on the line and the desire to make the special career milestones for Eben Etzebeth (lock) and Bongi Mbonambi (hooker) memorable.

The full 40-team line-up for Rugby World Cup Sevens 2022 has now been confirmed, following an enthralling weekend of action in Bucharest.

Bok Women expect to be tested in all areas in Japan

The Springbok Women side departed South Africa on Tuesday for a two-Test series against Japan, fully aware of the challenges that will await them in the Far East, where they will face the host nation on 24 July in the Kamaishi Unosumai Memorial Stadium in Iwate, and on 30 July in Kumagaya Rugby Stadium in Saitama in the Taiyo-seimei Japan Rugby Challenge Series 2022.

Rugby World Cup Sevens 2022 is delighted to welcome HAVAL as an Official Partner. In the week when the full line-up of 40 teams heading to Cape Town has been confirmed, excitement continues to build for a world-class festival of rugby sevens, which takes place on 9-11 September 2022.

Springboks seal the deal against Wales in Cape Town

The Springboks clinched a hard-fought, but ultimately deserved Castle Lager Incoming Series 2-1 win over Wales, beating their determined opponents by 30-14 in the third and final Test at DHL Stadium in Cape Town on Saturday.

The full 40-team line-up for Rugby World Cup Sevens 2022 has now been confirmed, following an enthralling weekend of action in Bucharest.