Last roll of the dice for home quarter-finals

The Vodacom Bulls, DHL Stormers and Cell C Sharks will have a last throw of the dice to secure home ground advantage in the quarter-finals of the Vodacom United Rugby Championship, with one of the three South African teams in line to grab second position on the log as the league phase of the competition comes to thrilling end this weekend.

With Leinster having secured the top spot on the log with a guaranteed home quarter-final, the scramble for second place and the other three home quarter-finals will go down to the wire, with five teams in the race – Munster, the Cell C Sharks, DHL Stormers, Ulster and the Vodacom Bulls.

The Cell C Sharks – who are in third place on the log tied with the second-placed Munster and fourth-placed DHL Stormers on 56 points – will take on the fifth-placed Ulster (55 points) in Belfast on Friday at 20h35 (SA time) in the first of two matches featuring South African teams, with the sixth-placed Vodacom Bulls (53 points) taking the field against Ospreys in Swansea at 21h10 (SA time).

The Emirates Lions, who are in 11th position on the log, will bow out of their inaugural Vodacom URC campaign on Saturday when they take on the Dragons in Newport at 16h00 (SA time), and the DHL Stormers will round up their league matches soon after against the Scarlets in Llanelli, at 18h10 (SA time).

Given the massive permutations for the top six teams in the competition, every point and bonus point will count in this gripping round.

The Cell C Sharks will be hunting their fifth win in a row when they take on Ulster at the Kingspan Stadium, but they will be expecting a massive onslaught from the hosts who will be desperate to kick on from their first win in four outings. 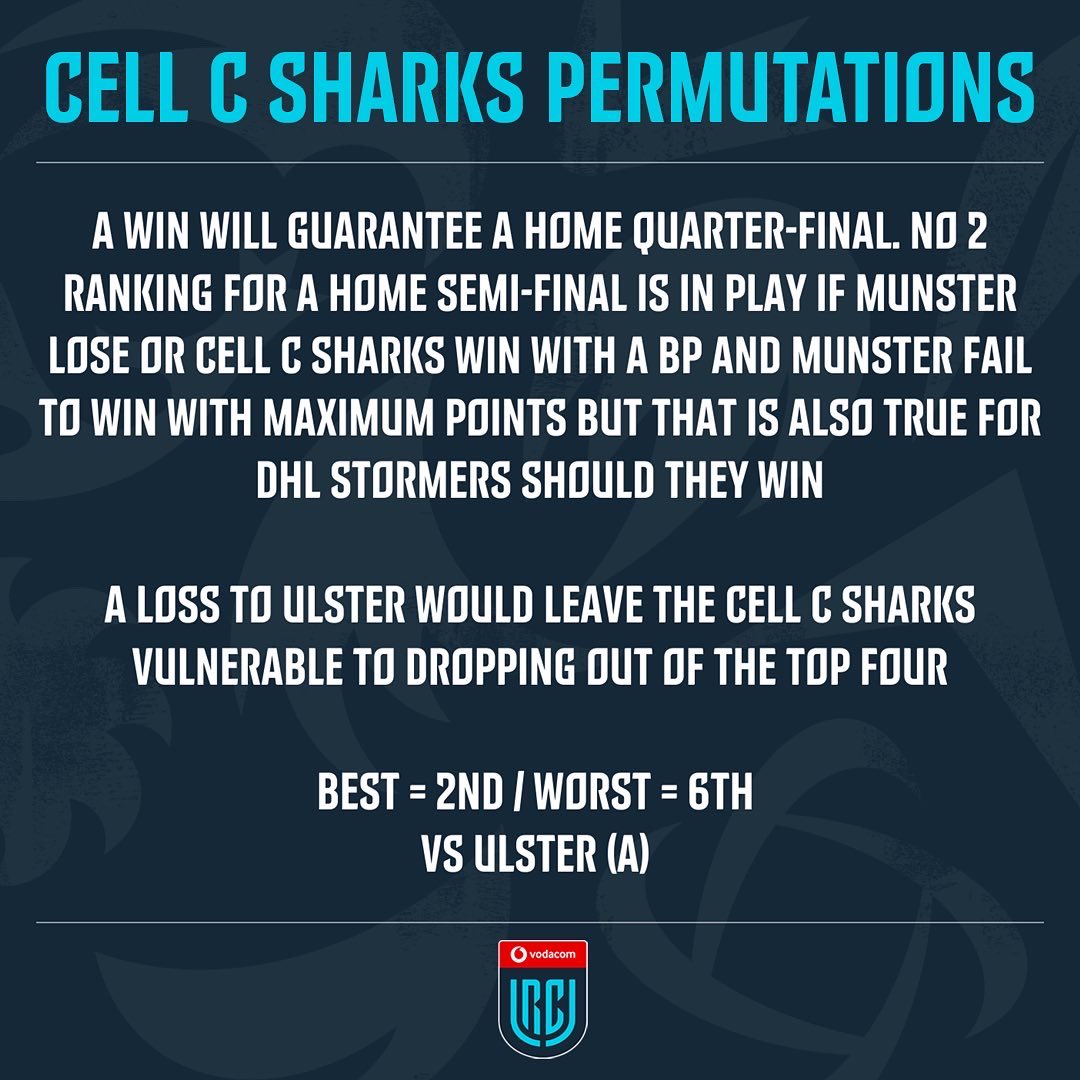 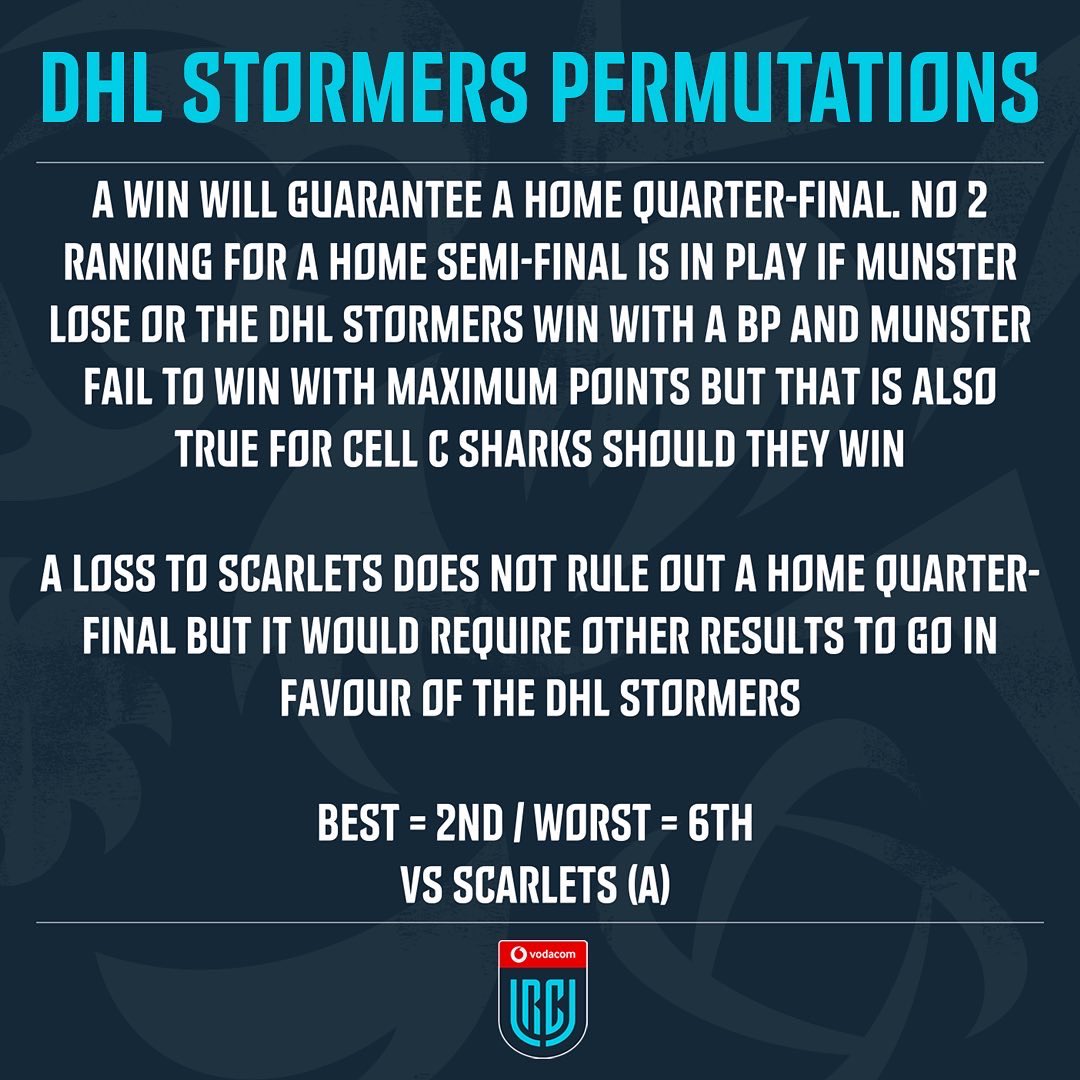 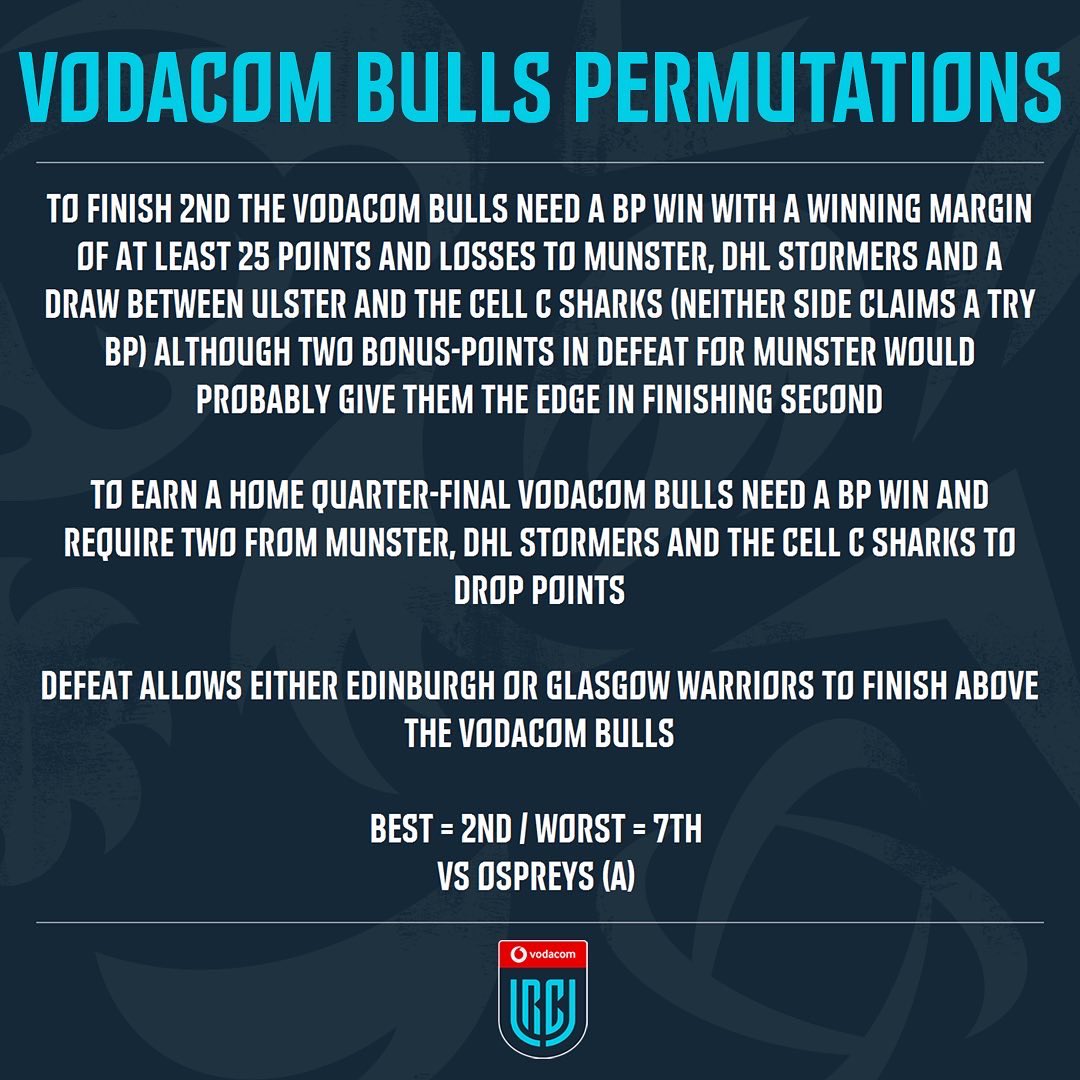 Adding to the hype of the match, a win for the Durbanites could guarantee them a home quarter-final, and they could earn the No 2 ranking if Munster and the DHL Stormers suffer defeats, or if the visitors earn a bonus-point win and Munster and the other two teams win but fail to gain a full house of points.

But defeat for the KwaZulu-Natalians, who have welcomed back Springbok centre Lukhanyo Am after a short stint playing club rugby in Japan, could likely result in them playing an away quarter-final.

“We’re currently sitting on top of the South African Shield and third on the log, so there is everything to play for,” said Cell C Sharks head coach Sean Everitt.

“We know what a huge challenge it is to go to Belfast to play at Kingspan, but we do believe we have the ability and the players, as well as the coaching team to go over there and do the job.”

The clash between the Vodacom Bulls and Ospreys at the Swansea.com Stadium will be equally thrilling as both teams give everything to finish as high up on the log as possible, and with the team from Pretoria going in search of their third successive win and Ospreys their fourth, neither team will give an inch.

Out of the three SA sides in the running for home quarter-finals, the Vodacom Bulls face the toughest path, as they have to win with a bonus point and a favourable points difference and rely on the Munster and the DHL Stormers to suffer defeats without bonus points, while the Cell C Sharks and Ulster have to draw their match without bonus points.

🚨 Update. How it stands when North plays South ⬇️

Who you backing in the Round 1️⃣8️⃣ showdown?@Vodacom #URC pic.twitter.com/f8x8Ispe3r

Vodacom Bulls Director of Rugby Jake White has named a settled side for the clash, with David Kriel back on the wing after a strong performance in the Carling Currie Cup last weekend.

“There is a lot to play for in this match, so we expect a huge battle against a motivated Ospreys side that will be looking to claim the Welsh Shield with a win over us,” said White.

“We expect the match to be a tough encounter, with Ospreys set to be, as always, competitive in the set pieces. We have seen what they are capable of, and they will no doubt want to get a good result in front of their home crowd.”

The Emirates Lions, meanwhile, will be playing purely for pride against the Dragons at Rodney Parade in what will mark their final pool match, which will fuel their motivation to finish the competition on a winning note.

Both teams have struggled with their form in their last few matches, with the Johannesburgers winning only one of their last three matches, while the Dragons come off four back-to-back defeats, which could set the scene for a hard-fought encounter.

Reinhard Nothnagel will captain the Emirates Lions in this clash after their head coach, Ivan van Rooyen, selected a tour squad with the future in mind for their trip to Wales.

Here’s how the standings look ⬇️

One week to Round 18 🤩@Vodacom #URC pic.twitter.com/fOphDVdm72

“[This trip] gives us an opportunity as a franchise to cast our eye towards the future, and we believe that the bulk of this group will form part of that core,” said Van Rooyen.

“Once again, this approach is in line with our strategy of developing within our structures and some of these names are proof of that. In saying that, Dragons will be a tough outfit to play in their own backyard. However, it offers a few of our players an opportunity to impress.”

In stark contrast, the DHL Stormers have everything to play for against the Scarlets at Parc y Scarlets as they set their sights on a home quarter-final and possibly a place in the top two, and with a morale-boosting run of seven wins in a row going into the clash, they will back themselves against the hosts who have stumbled at crucial times during the season.

A win could guarantee a the Capetonians a home quarter-final, while they will have a shot at the No 2 ranking if they secure a victory and Munster and the Cell C Sharks suffer defeats.

A defeat, in turn, will leave them relying on other results to go in their favour in order to see them earn a home quarter-final.

DHL Stormers head coach John Dobson, who was forced to travel to Wales without injured scrumhalves Herschel Jantjies and Paul de Wet, said they know what is on the line for them on Saturday.

“This is a vital game for us as we look to secure home advantage in the play-offs, so the players all understand what is at stake,” said Dobson.

“We want to end the league phase of the competition on a high, but we know that we will have to be at our best to come away with a win against a highly motivated Scarlets side.”

Three teams unbeaten at U20 YTC tournament in CT...

The Blue Bulls, Western Province and Limpopo finished the Under-20 Youth Training Centre (YTC) tournament in Cape Town u...

With kick-off times now confirmed for all 18 rounds of the Vodacom United Rugby Championship, fans can subscribe to the ...

A second tranche of tickets for public sale for the Rugby World Cup Sevens 2022 – to be hosted in Cape Town in 43 days’ ...

The second Vodacom United Rugby Championship season kicks off in 50 days’ time with the league ready to build upon an en...

A new champion will be crowned in the Women’s First Division when the Leopards host the SWD Eagirls in the final at Olën...

Dalvon Blood ready for next step in Toulouse

"What have I done now?” This is the question Davlon Blood asked himself on Sunday morning when he received two phone calls in quick succession, the first from Springbok Sevens team doctor Janesh Ganda, to come and see him, and immediately thereafter from SA Rugby Sevens High Performance Manager, Marius Schoeman.

Biggar to lead Wales to South Africa in July

Wales men’s head coach Wayne Pivac has named a 33-player squad for the three-Test Series against the Springboks in July – the national squad’s first visit to South Africa since 2014.

Solontsi: Working towards the future in France

The Springbok Women's Sevens rugby journey in 2022 makes a brief stop at the HSBC France Sevens in Toulouse this weekend, but for team captain, Sizophila Solontsi, it will be an important stop in their ultimate season.

The Vodacom Bulls have named a 28-man squad to prepare for their crucial Vodacom United Rugby Championship clash against the Ospreys in Swansea, Wales this week.

Ulster head coach Dan McFarland has delivered a ringing endorsement for the Vodacom United Rugby Championship in the build-up to an exciting final weekend of league play.

The Springbok Sevens team will have to beat Samoa with a convincing score in Toulouse at 12h22 on Saturday if they want to proceed to the Cup quarter-finals of the HSBC France Sevens, and keep their lead in the HSBC World Rugby Sevens Series for the 2022 season.

Sharks go down fighting against Ulster in Belfast

The Cell C Sharks went down fighting 24-21 against a determined Ulster outfit in their final Vodacom United Rugby Championship league match at the Kingspan Stadium in Belfast on Friday, which could see them play an away quarter-final in two weeks.

The learning curve was a steep one indeed, but the Springbok Women's Sevens squad will benefit hugely from the opening day of the HSBC France Sevens in Toulouse on Friday.

Cornal Hendricks scored a second-half hat-trick to help steer the Vodacom Bulls to a superb 38-31 victory (half-time 12-10) in their final Vodacom United Rugby Championship league match against the Ospreys in Swansea on Friday evening.

Moerat and Ungerer to start for Stormers in Llanelli

There are two changes to the DHL Stormers starting line-up for their final round Vodacom United Rugby Championship encounter with the Scarlets in Llanelli on Saturday, with kick-off at the Parc y Scarlets scheduled for 18h10 (SA time).

Dalvon Blood ready for next step in Toulouse

"What have I done now?” This is the question Davlon Blood asked himself on Sunday morning when he received two phone calls in quick succession, the first from Springbok Sevens team doctor Janesh Ganda, to come and see him, and immediately thereafter from SA Rugby Sevens High Performance Manager, Marius Schoeman.

The Springbok Sevens team will have to beat Samoa with a convincing score in Toulouse at 12h22 on Saturday if they want to proceed to the Cup quarter-finals of the HSBC France Sevens, and keep their lead in the HSBC World Rugby Sevens Series for the 2022 season.