Zain Davids taking the exciting Blitzboks journey in his stride

Although the Springboks Sevens claimed the Emirates Dubai 7s in impressive fashion last weekend, influential squad member Zain Davids was quick to emphasise the need for further improvements during the second 2022 HSBC World Rugby Sevens Series tournament, also to be staged in Dubai on Friday and Saturday.

Last Saturday the Blitzboks outplayed the United States with a dazzling display to claim another Dubai title and stretching their own unbeaten winning streak to 18 games.

Strongly built forward Davids has steadily grown into a stalwart and is now one of the more experienced players in the squad. Looking towards the weekend’s tournament, the 100kg forward said they know all too well they will have to start from scratch on Friday morning.

“It was six tough games last weekend, and the bodies were tired afterwards, but we had to restart and refocus on the new challenges coming this weekend,” said Davids, who also underlined the need to sharpen their mental readiness.

The Blitzboks face the same group opponents as last weekend on day one, namely Japan, Ireland and Great Britain. While they managed to qualify with ease and as top seeds from their group last Friday, the South Africans are nevertheless mindful that the other teams would have done their homework and make better plans to try and topple them.

Although they will be very familiar with their group opponents, Davids nevertheless cautioned: “We cannot underestimate anyone. We have a target on our back, and everyone knows we have to work very hard if we want to achieve anything (this coming weekend).”

Although now settled in his team role, Davids admitted he is still growing in his role as one of the more experienced players, and that he is feeling more mature in his role. He paid tribute to former squad stalwarts who have helped him on his journey with the Blitzboks.

“I was fortunate to be able to play with and learn from players such as Philip (Snyman) and Cecil (Afrika). They, and others, helped me a lot in terms of settling into the environment so I could be comfortable and enjoy myself,” explained Davids.

The Cape Town-born Davids is a vital cog in the team’s defensive structure, as shown by his tackling proficiency last weekend. The 19 successful tackles he completed over the two days placed him joint first on the ranking in that department, while he is also a very strong ball carrier and a menace at the breakdown.

Last week was his 25th World Series for the Blitzboks and he increased his number of matches played up 126. He also scored one try to take his career tally to 20 (100 points).

With the likes of Great Britain, USA and ever dangerous Fiji all looming large again this weekend, Davids and the Blitzboks will once more have to show steel in defence and clinical precision when on attack to ward off the challenge. 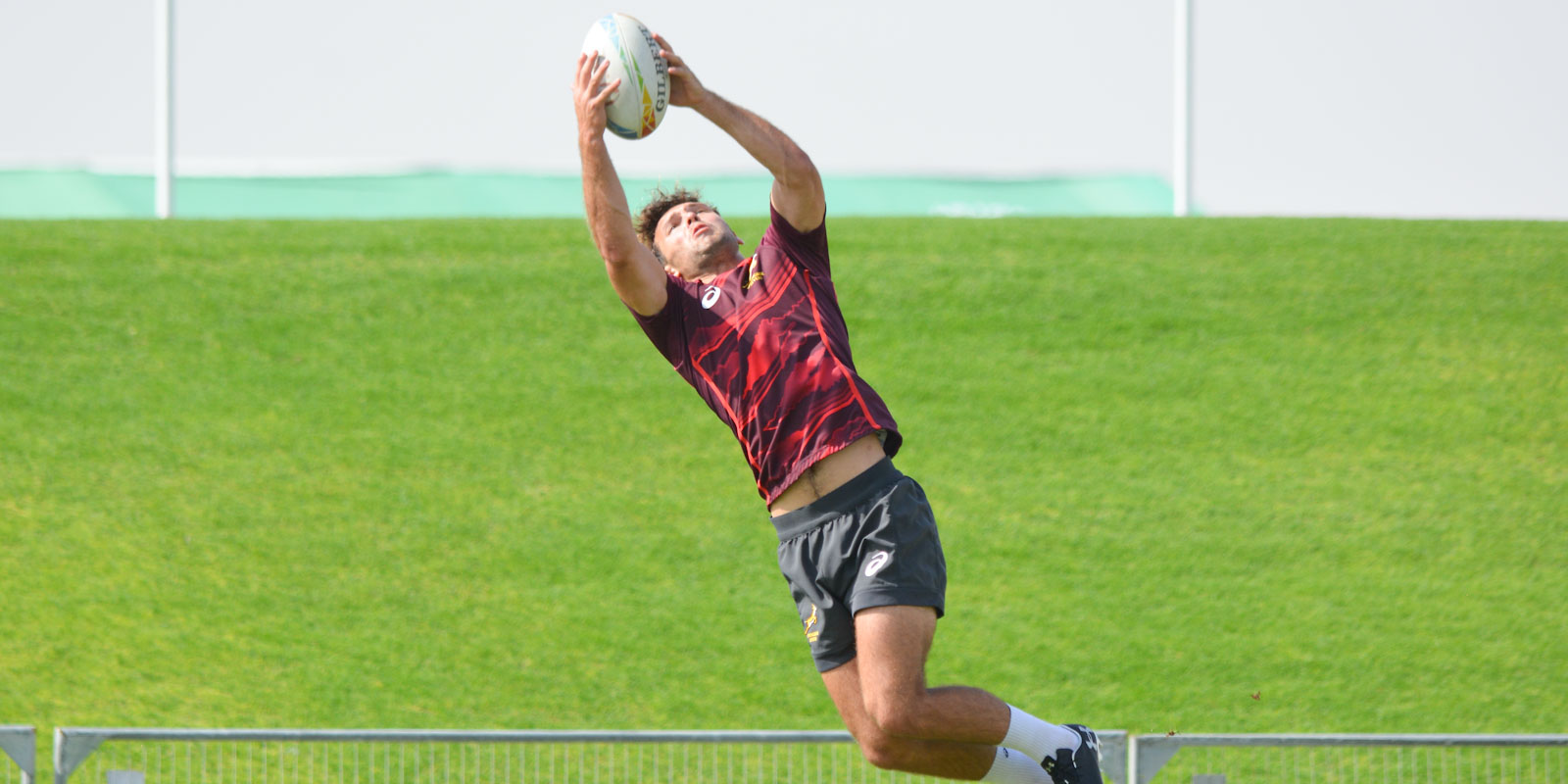 Tiaan Pretorius during a training session in Dubai.

Meanwhile young newcomer Tiaan Pretorius will be looking to gain more experience in only his second Series outing for the Blitzboks, having made his debut last week in the UAE.

Pretorius, a versatile forward, and backline playmaker Shilton van Wyk are new faces in the squad after an assortment of injuries ruled out several regulars.

The young duo are products of the renowned Springboks Sevens Academy programme based in Stellenbosch, and both players made a scoring start to their respective Series careers in Dubai.

“The first match was so fast, for me it felt like a blur,” Pretorius recalls his debutant experience, when he topped a good impact with a long-range try against Australia in last weekend’s quarterfinal clash.

“I don’t know much about the whole (try-scoring) process, but all I can remember is that the 50 meters felt like a 100 meters to me,”  he explained.

His patience and development in training with the enlarged national squad was eventually rewarded with a call-up to represent the Blitzboks in Dubai.

“I’m just so happy for the opportunity. It does not always happen that you get so much playing time in your first tournament, so I’m grateful for that and I’m just taking in as much as I can,” said Pretorius, who will no doubt be looking forward to add more experience to his new international career over the weekend.

Springbok Sevens stalwart Muller du Plessis has been ruled out with a leg injury while Ryan Oosthuizen will be given as much time as possible to recover from his ankle niggle as the Blitzboks got their preparations underway for this coming weekend’s second HSBC World Rugby Sevens Series tournament in Dubai.

While most of the attention in the Vodacom United Rugby Championship this weekend was on the ongoing drama to get the four sides out of South Africa, elsewhere Ulster rocked the competition with their win over top side Leinster in Dublin.

Two Vodacom United Rugby Championship derbies originally scheduled for February 2022 have been brought forward and will be played in Durban and Cape Town this weekend.

Powell: Blitzboks’ resolve to be tested in Dubai

The Springbok Sevens’ mental and physical resolve will be severely tested this weekend in Dubai, where they are the top seeds for round two of the new HSBC World Rugby Sevens Series, according to Blitzboks coach Neil Powell.

There might have been an element of youthfulness about the Cell C Sharks in the early rounds of the Vodacom United Rugby Championship, but the side named to take on the Vodacom Bulls in Durban on Friday night is anything but inexperienced.

The Vodacom Bulls will travel to Durban for their Vodacom United Rugby Championship clash against the Cell C Sharks on Friday evening with a reshuffled backline, with Kurt-Lee Arendse starting at fullback.

Edwill van der Merwe, who recently joined the Emirates Lions from the DHL Stormers, will start for his new team against his former team-mates when the two sides clash in a Vodacom United Rugby Championship encounter in Cape Town on Saturday afternoon.

Local is lekker in Durbs and CT this weekend

The coast is many people’s destination in December and it’s no different for the Vodacom United Rugby Championship when the competition returns this weekend, albeit in a slightly different guise than what was expected, with two big South African derbies in Durban and Cape Town.

Powell: Blitzboks’ resolve to be tested in Dubai

The Springbok Sevens’ mental and physical resolve will be severely tested this weekend in Dubai, where they are the top seeds for round two of the new HSBC World Rugby Sevens Series, according to Blitzboks coach Neil Powell.